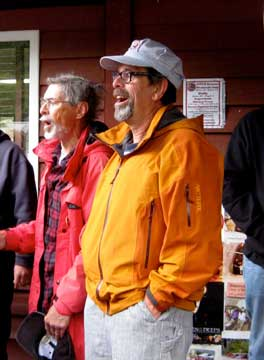 We had a great Opening Weekend with lots of really great visitors, some as far away as Germany and Holland.

Though Saturday was cool and rainy, the Kimberley Community Choir provided a ray of sunshine as they dropped in at the station to surprise choir member and volunteer engineer, Rand Davis. He and his family, some from as far away as the east coast, had celebrated Rand’s daughter’s wedding the day before, and had come to ride the Resort Express Train before heading home.

As the train pulled into the Downtown Station, our guests were treated to an impromptu mini concert. Rand was even able to join in for a couple of songs! What a treat for all of us! I’m sure Rand had smile on his lips and a song in his heart as he took over the engineering for the rest of the day.

The lovely lady in the KUMR hoodie is none other than our secretary, Esther Jacobson. Our volunteers and not only dedicated, they are also multi-talented!