Volunteers from the Sullivan Mine and Railway Historical Society gathered with funders on Thursday, September 8, 2011 to celebrate driving the last spike for the new track at Kimberley Alpine Resort and the opening of the new Resort Station. However, there was sadness in the air as well, as volunteers remembered one of their longest serving members, Lloyd Ryan, who passed away on Wednesday. 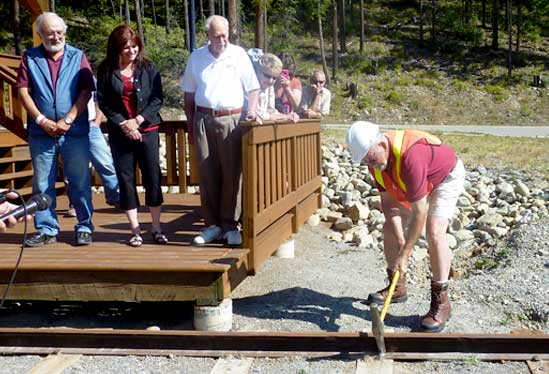 In fact Engine No. 94 which was used on Thursday to transport guests up to the station was built by Bill Spence, Gar Jones and Lloyd Ryan.

Train rides scheduled for Saturday were cancelled in order that SMRHS members can attend Ryan’s funeral.

“We ran a special memorial train on Saturday at 4 p.m. for Lloyd’s friends and family,” said Society President Mick Henningson. “At the family’s request, in lieu of flowers, they would accept donations to the railway.”

“They say that’s where he was happiest.”

However, Thursday was also a day to celebrate achievement. Society members have been working hard laying track all spring and summer and were very pleased to see the line back to the Resort. The tracks had been moved to make way for the building of the Conference Centre.? Now with the tracks and new station in place, conference attendees can use the train as a summer shuttle between the Conference Centre and downtown.

In fact, later this month the first load of conference delegates will board the train downtown, visit the Underground Interpretive Centre, and disembark at the Kimberley Alpine Resort Station enroute to their conference.

Attending the Thursday ceremony were representatives from the funding organizations, Teck Resources Ltd., Columbia Basin Trust, the Resorts of the Canadian Rockies, the Kimberley Project Society and the City of Kimberley.? Several volunteers, City officials, and other interested parties.

The SM&R regular public service is now closed for the 2011 season. However, several special trips are still planned into the beginning of October.