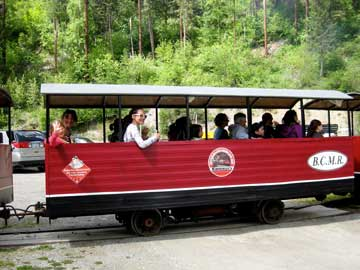 We at KUMR hosted a very special group: the Northern Lights Gymnastic Club from Rankin Inlet, Nunavut, on Sunday, May 26! They were here for a gymnastic competition hosted by the Kimberley Gymnastics Club. They flew from Nunavut to Winnipeg, Winnipeg to Calgary, spent a little time touring Banff, stayed overnight there and then headed to Kimberley.

When the competition ended on Sunday at 2:15 p.m., leader Lisa Kresky had a bit of a problem: how to get 22 people from the competition to the Station in time for the 3:00 train. Fortunately Kimberley club parents (good hosts that they are) stepped up and transported the Northern Lights group to the train Station. They arrived at the Station a few at a time sporting their medals and big smiles!

Guests from Colorado and Indiana who were also going on the 3:00 tour had no problem with waiting a few minutes for all of the gymnastics group to arrive!

After the Mining Train Tour, the gymnasts and leaders were heading to the Trickle Creek Lodge for pizza and swimming with their new friends from the Kimberley Gymnastics Club.